Your Reputation Precedes You

Briefing Your Way to Better Characters

[Tyrion] knew the man only by reputation, to be sure… but the reputation was fearsome.

“The man” in this case is the Red Viper, Oberyn Martell. One of ASOS’s best surprises, he shows up with little fanfare – he’s filling in for his sickly brother Doran on the Small Council – wreaks havoc, and dies.

Other characters’ debuts get more buildup. Two major players in the War of Five Kings, Stannis Baratheon and Tywin Lannister, are constantly discussed by others before we hear them say a word.

This technique, of briefing the reader on a character before you meet them, is intriguing to me. It sets a baseline. There’s an example of this in a Catelyn chapter, in which we hear a bit about Littlefinger just before he appears. What Martin does with Stannis and Tywin is much more sustained. Both men gain status by repetition alone. Stannis is mentioned 98 times before he appears… in the second book! With that much buildup, it’s exciting, like finally meeting your sibling’s significant other: “I’ve heard so much about you!”

Martin’s handling of Stannis is particularly interesting to me, because I had a Stannis in my book, and he didn’t work. Besides the names (my guy was called Artum), the two are nearly identical. Each is the ambitious brother of a king who is losing his grip on his kingdom. Each is absent from the early action, and this absence is the subject of some speculation. Each show up later to make power plays.

My mistake was in letting Artum stay off the radar for long stretches. Stannis’s absence tends to hover. And when his name is invoked, there’s some characterization attached to it, usually a reference to his iron temperament. I didn’t do that with Artum, because I wrote the book in order, and therefore didn’t know who the guy was until he showed up halfway through. I figured it out quickly enough, but neglected to propagate that back towards the beginning of the text. Stannis, on the other hand, is Stannis from the very first mention. There’s nothing amorphous about Martin’s descriptions – they’re so consistent they’re even a little repetitive.

Here’s a selection of Stannis mentions from AGOT:

“Robert can barely stomach his brothers. Not that I blame him. Stannis would be enough to give anyone indigestion.”

Lord Renly laughed. “We’re fortunate my brother Stannis is not with us. Remember the time he proposed to outlaw brothels? The king asked him if perhaps he’d like to outlaw eating, shitting, and breathing while he was at it. If truth be told, I ofttimes wonder how Stannis ever got that ugly daughter of his. He goes to his marriage bed like a man marching to a battlefield, with a grim look in his eyes and a determination to do his duty.”

Robert’s lusts were the subject of ribald drinking songs throughout the realm, but Stannis was a different sort of man; a bare year younger than the king, yet utterly unlike him, stern, humorless, unforgiving, grim in his sense of duty.

That the armorer’s sullen apprentice was the king’s son, Ned had no doubt. The Baratheon look was stamped on his face, in his jaw, his eyes, that black hair. Renly was too young to have fathered a boy of that age, Stannis too cold and proud in his honor.

“Hear me out. Stannis is no friend of yours, nor of mine. Even his brothers can scarcely stomach him. The man is iron, hard and unyielding. He’ll give us a new Hand and a new council, for a certainty. No doubt he’ll thank you for handing him the crown, but he won’t love you for it […]

They are quite a pair, Stannis and Renly. The iron gauntlet and the silk glove.

I was curious if there were other characters that got this treatment: so I took my dialogue tags, found the first utterance from each character, and scanned all the text before it for mentions of that character’s name. The results aren’t precise, because many characters share the same name, and sometimes characters are referenced by something other than their name. (e.g., The Lannister kids might refer to Tywin as “father.”)

But to give you an idea: 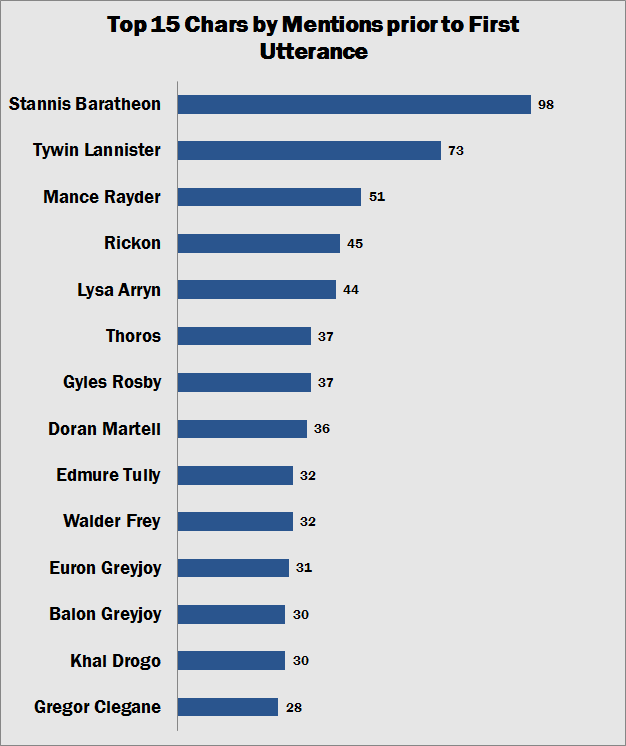 Some characters make this list not because they’re infamous, but because they’re quiet. Gyles Rosby, Rickon, Drogo, and Gregor Clegane all pile up mentions because they don’t have a lot to say. Gyles is one of Cersei’s lackeys, a coughing mannequin that is there mostly to fill space at the table. Rickon’s a half wild little boy, Drogo’s a full wild man, and Clegane is a murder golem. So none of these people are inclined to speak.

Tywin and Mance are both talkers, and both lead large armies. As such, they generate conversation. Tywin, like Stannis, is a known quantity at court, and we hear about his cruelty and power. Mance is more of a wildcard, or at least the POVs don’t know him very well, so most of his mentions have to do with logistics: where is he massing his wildling army, and when will he attack? Still, sprinkled in there are references to his old life as a brother of the Night’s Watch, and his pride, and his love of songs.

Doran Martell, as the leader of a great house, would fall into this same major player category with Tywin and Mance, but Dorne’s never been that central to the story. Maybe Martin didn’t know as much about them at the outset, but decided to expand their role midstream. Since he can’t revise already published books, he may wish he’d set them up more. We learn nothing specific about Doran until ASOS, when Pod and Tyrion ride out to meet the Martell delegation:

“Doran Martell always travels in a litter,” the boy said. “A carved litter with silk hangings, and suns on the drapes.”

Tyrion had heard the same talk. Prince Doran was past fifty, and gouty.

On the other hand, Doran’s cipher status is part of his character design. His mildness is a cover for something much more menacing, which is what makes his “fire and blood” monologue so effective. So perhaps Martin couldn’t have told us anything about Doran even if he’d wanted to.

Thoros isn’t important like these other men, but he’s still talked about quite a bit. That’s because he’s got a mystique about him, having to do with his powers of resurrection and a flaming sword that he wields in tournaments. That’s why he’s a colorful character, and rates highly in this essay.

Return to table of contents