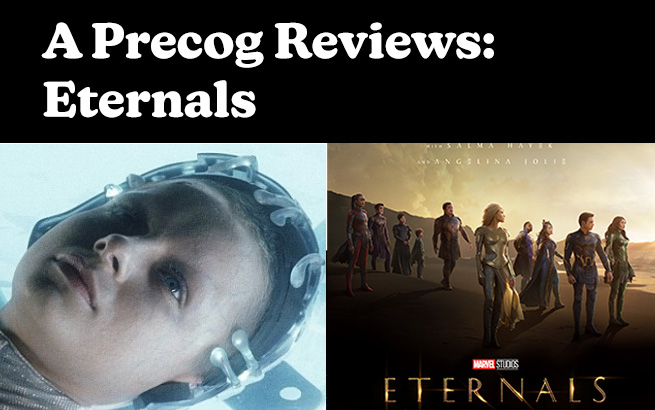 The following review was written on 10/31/2021, just after seeing Last Night in Soho. That film was preceded by a trailer for Eternals, making it the fourth time I’ve seen it over the past two months. “Fall collection, IKEA.”

I’m writing this pre-review because the movie’s got bad buzz, and as an exercise, I want to see if I can intuit what the issues will be, based on nothing more than vague Twitter complaints and the aforementioned trailer. I’ll come back and fill in a real review after I’ve seen the movie. Let’s get started!

You can forgive Kevin Feige for believing in the machine that he built. Since 2008, whatever he’s fed into it — be it a talking raccoon or a hero named Ant-Man — has come out the other side a big pile of gold ingots. To sustain success at this level, for this long, in an industry as volcanic as Hollywood — it speaks to a creative process & strategy that’s unlocked something. So it’s noteworthy that Feige’s crew failed to get Eternals over the finish line. But before you blame its muted reception on the hubris of corporate creatives, or the fact that even a golden goose sometimes lays a plain old egg, I want to consider that Kevin Feige’s hatched a new plan for his MCU.

With any failure, you should look to the most obvious challenge the project faced. Eternals has a big one. It’s trying to launch a supremely obscure team of superheroes. It’s not impossible, of course. James Gunn showed how it was done with Guardians of the Galaxy, but he had two key advantages.

First, a tailwind: his movie dropped back in the heady days of Phase 2, immediately after the excellent Winter Soldier. Eternals drops after the satiating conclusion of the Infinity War saga, with no narrative momentum behind it.

Second, Gunn is the champion of the hardcore Marvel fan — these people all share one set of tastebuds. I mean, this dude survived tweeting: “‘Eagle Snatches Kid’ is what I call it when I get lucky.” (Among other things. I forgot how gross these were.)

Nobody comes back from that in the eyes of Disney’s HR department unless that person is a rainmaker. Eternals is led by Chloé Zhao, whose biggest movie to date, Nomadland, made 40 million bucks worldwide. I didn’t see it, but she got great reviews and Oscars for directing and best picture, so the bona fides are immaculate. But let’s remember that Martin Scorsese — a delightful, smiley senior citizen who also made Goodfellas — is a bête noire of the Marvel fans, so industry cred will get you nowhere with these people.

Feige and his crack squad of hitmakers surely knew this going in, so their first order of business was locking down a cast that could insure them against any wobbles from an arthouse director unused to the demands of blockbuster filmmaking… right?

Luring Angelina Jolie back into the fast lane with a doubtlessly fat paycheck was a great place to start. She’s a star who can open films, and has even done it before on the Mouse’s behalf, with Maleficent. Though it’s been a decade since she did full action in Salt, she still has her fastball, and does a good job with her few fighting sequences.

Kumail Nanjiani was also a savvy bit of casting, though they couldn’t have known it at the time. In gearing up for this role, Nanjiani transformed from “third lead on an HBO series about programmers” to “flashpoint in our public discourse on the virility of Asian males in media”. And while he does look good in the suit, it is impossible to Romanian deadlift your way out of comedian voice. That said, I dug his commitment to the Bollywood dance number, and would have liked to see him play a bigger part in this movie — I thought he’d be in it more.

Richard Madden, aka the Young Wolf, Robb Stark, does have leading man gravitas, but this won’t be the movie to launch him. Casting him and Kit Harrington (Jon Snow) was a big miss, though to be fair, when these contracts were inked, Game of Thrones was still a few weeks away from exorcising itself straight out of the zeitgest. As for the performance, Madden did a fine job of providing stern masculine energy, but I preferred him in the bodyguard show, where his tightly wound energy was a better match for his compact physicality. Some actors’ calling card is a million-dollar smile, Madden’s is a clenched jaw.

Quick hitters on some of the more peripheral characters who probably have less of an effect on the domestic box office. (Apologies to Salma Hayek if I’m wrong about that.)

Eternals has a hook problem. I think it’s smart to make the Snap an inciting incident, which gives continuity, and the seven day deadline is a great way to add urgency. But that momentum is derailed in the lengthy “assembling the team” section, which constitutes most of the first 40 minutes. I know it’s not fair that The Avengers got a bunch of solo movies to do all their character setup in, but don’t use a ticking clock if you’re going to then ignore it.

Now don’t get me wrong — a reluctant hero being drawn out of semi-retirement is one of the most time-honored tropes in action stories. But played on a loop, it loses its appeal.

Also, the team dynamic here isn’t as fun as the Avengers’. That was a team of rivals. People like watching a bunch of high-performers have ego battles, and then, over time, the family dynamic emerged organically. Here, we’re being plopped into the middle of relationships that have been in progress for millenia, which isn’t as exciting as watching those first bonds develop.

I think my biggest issue is with the characters themselves. For one thing, they feel like they were conceived as a group. You might think that that’s a good thing — by developing many characters concurrently, you’re guaranteeing balance across the whole, and can design holistically. But the last thing we need in an ensemble this big is aesthetic unity. They need to be sharply differentiated, and not in the obvious, mechanical way: “let’s evenly spread these characters across as broad a spectrum of humanity as possible”. It is an appealingly algorithmic approach for a writer quailing at the task before them. You simply choose your axes — ethnicity, gender, superpowers — and then you polarize the cast along these various dimensions. This will get you an ensemble that’s easy to tell apart… but will anyone care about them? (Besides the marketing team of course, they’ll love how many different audiences you’re representing.)

In my experience, when you’re developing your cast, if you do them in batches — lets say a batch of ten, as in this movie — you aren’t marshalling 10x the amount of creative energy. You’re pouring 1/10th of that juice into each of these characters.

Still, this is a process issue, and one that can be solved with more time and more passion. What can’t be solved is the fact that the Eternals are inherently mild characters. These are demigods charged with watching from the wings as humanity unfolds — it’s in their nature to be a little more stately and subdued. But I don’t think Disney necessarily minds, in this case.

(Sidenote: I did like it when one of the Eternals proved to not be so eternal. RIP Salma Hayek!)

In the casting section, I mentioned the performers I thought were relevant to the domestic box office. Now let’s talk about the far more important Gemma Chan and Ma Dong-seok, who play key roles in the story and an absolutely crucial role in the marketing push.

Eternals is Disney’s latest sally into the Chinese market, following on the heels of Shang Chi and Raya and the Last Dragon. Each of these films attempted to reach Chinese wallets by slightly different trajectories. Raya was classic Disney, aka royal horsegirl fantasy — but with a dragon in place of a horse. So all the surface texture was China-friendly, while leaving a quintessentially Western core. Shang Chi was Black Panther reformulated for the Chinese diaspora here and in Canada. The thinking in both cases was: let’s start with something that’s proven to work stateside while also having a good chance of resonating in China. Awkwafina, who is in both films, personifies that strategy.

Eternals inverts that by hoping Americans will embrace a story with Western-friendly trappings that is still fundamentally appealing to China — which is to say classical, sweeping, operatic, and ensemble-driven. This is because Hollywood has exactly one idea about what a Chinese audience wants, inferred from the success of two films: Crouching Tiger, Hidden Dragon, and Red Cliff. (If you haven’t heard of it, Red Cliff is a 2008 John Woo film that broke Titanic’s box office record in mainland China.) But it’s challenging to write a story that will play on both sides of a cultural gulf that can seem as wide as the Pacific. You remember the Chinese movie that Matt Damon made, The Great Wall? That thing made $289M internationally… but only $45M domestic, for 13% of the take.

But Disney will keep trying, because they need to grow, and China is the place to do it. Nowadays, the Chinese moviegoer is the dark matter of the movie universe. For an American rube like me, I don’t have the chance to observe these cultural actors directly, but every decision the big Hollywood studios make strongly implies their abundance, and their gravitational pull. Hell, John Cena can speak Mandarin; the market is just too big to ignore.

This is why Eternals, which did nothing for me, is so intriguing. It’s a Marvel movie that can still be a big success while failing to please Marvel fans. Feige and his team have reached a point where they don’t need their fanboys, and maybe don’t even need Americans, full stop.

But then there’s Chloé Zhao. At first you might think that she’s the perfect cinematic ambassador to China — she was born in Beijing and summited Hollywood. Except she’s been targeting by the Chinese government’s censors for past criticisms of the party, to the point that mention of her recent success have been suppressed behind the Great Firewall. I know absolutely nothing about the average Chinese person’s relationship to their government, so maybe this scuttles the movie’s chances over there — or maybe it’s a non-issue.

Whatever the case may be, the fact that Marvel didn’t blink at bringing her aboard, or at featuring a queer character, which got the movie banned in Saudi Arabia/Qatar/Kuwait, as well as the equivalent of a hard R rating in Russia, suggests that the company line is: “Yes, we want your international dollars, but no, we won’t compromise our avowed politics to get them.” Instead, they altered the deep mechanics of the storytelling, thinking that such things do not acknowledge national borders — the cool reception suggests otherwise.