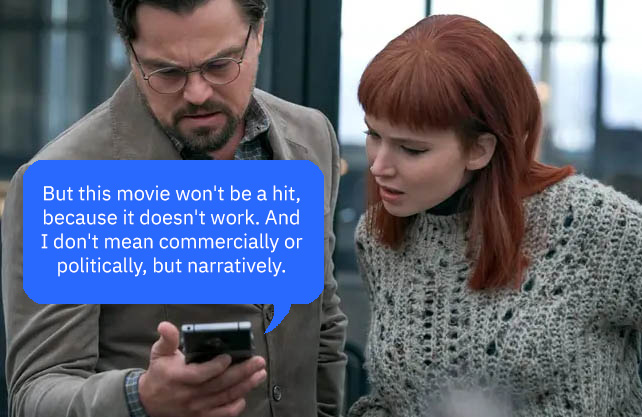 If you want to understand people, and many readers do, you have to engage with cynicism. A tough ask: the model is predictive, but its exponents are miserable, and not naturally gifted storytellers. Just a few actives pop to mind: Charlie Brooker (Black Mirror), Armando Iannucci (Veep, In the Thick of It), Sacha Baron Cohen (Borat, Ali G), and now, maybe, Adam McKay with Don’t Look Up.

Except McKay’s politics prevent him from effectively telling a story as cynical as this one. Our oil & water two-party system is maintained by an empathy gap — I just don’t understand how those people can think and act and vote like that — and a cynical writer can’t afford to be short on empathy.

That’s not intuitive. When your final analysis is that everyone is a short-sighted, greedy, silly jerk, that doesn’t seem to call for much empathy. Isn’t empathy just good for loving thy neighbor? Not at all. When paired with cynicism, it can open up a flank on another Biblical lesson:

If you hate thyself like you hate thy neighbor, there’s a kind of compassion to be found there there. But if you can’t locate the enemy in your own heart, and the heart inside your enemy, you’re not making me realize there’s a reason all those birds keep flying into the walls of my house, but rather you’re doing something far more boring: shouting look at how stupid these people are! They’re going to destroy everything! Are you mad enough to vote for my preferred candidates yet?!

If this movie is meant to spur action, the glass houses approach is more effective. Strip away the viewer’s sense of righteousness, remind them that diligent recycling doesn’t move the needle, dismantle the idea that we can personal-responsibility our way through a global problem — disquiet them all the way to the ballot box. In one moment, the movie does that: the creepy tech mogul gives DiCaprio an algorithmic dressing down.

My algorithms have determined eight fundamental consumer profile types. You are a lifestyle idealist. You think you’re motivated by beliefs, high ethical beliefs, but you just run towards pleasure and away from pain. Like… like a field mouse.

But that’s just one moment. For most of the runtime, it’s looking to inflame those who fear climate change by rubbing their noses in the complacency of our institutions. I don’t see anything that might engage a conservative Christian, whose holy text frames a catastrophic rise in sea levels as a nice fresh start with the help of a righteous man & a big boat.

McKay, who’s up on the ramparts, would likely dismiss the idea of an “empathy gap” as kumbaya horseshit. The movie lampoons a Hollywood star played by Chris Evans — cameoing here as gamely as he did for the unnerving IP circus known as Free Guy — preaching unity on a press junket, but only in the interest of securing a four quadrant box office hit.

But this movie won’t be a hit, because it doesn’t work. And I don’t mean commercially or politically, but narratively. McKay’s co-writer, David Sirota, has written speeches for Bernie Sanders, and that skill doesn’t translate to narrative, which operates on psychosymbolic wavelengths far longer than the high-frequency needling of a stump speech.

For example, a stump speech is addressed to a mob. Movie theaters seat mob-sized quantities of people, but stories are addressed to individuals. As such, certain techniques do not translate. Adam McKay knows this:

Before DiCaprio signed on, he asked McKay if they could include a speech in the script, something akin to the ‘I’m mad as hell’ scene in ‘Network.’ ‘And I was like, “Speeches are tricky, man,”‘ McKay recalls telling him, worried about sounding preachy. ‘It’s like drum solos. They were awesome in the ’70s but…’ (Vanity Fair interview)

The speech went in, of course, though undercut by an aggressive scene transition: instead of watching DiCaprio deliver his grand finale, we cut to him stuffed in the backseat of a government car with a black bag over his head.

In other spots, however, McKay seems bullish on the idea of cinematic rabble-rousing. In one particularly implausible scene, a waitress eavesdrops on the main characters and finds the bad news they bring so enraging that she, and all the other patrons, immediately start to riot.

And McKay’s camera, which ducks out on DiCaprio’s big speech, lingers in other places. Notice how it makes a point of finding the purse hanging from the arm of Jonah Hill’s character. It’s the kind of emasculation that would work well in a speech (given in 1998) to whip up a crowd. Let’s all focus our derision on this guy, carrying his mother’s purse! In this context, I simply lose trust in the storyteller’s command.

Compare that to a choice that works really well: the runner about the Army general who charges the main characters for snacks. While waiting for an audience with the president, he provides chips & a bottle of water, and asks for 10 dollars. Shortly thereafter, Jennifer Lawrence’s character discovers that the snacks are free. This haunts her throughout the rest of the movie. “Why would he do that?” she wonders aloud. “He’s a three-star general…”

The thrust is the same — get a load of this weirdo — but the way this symbol unfolds is far more elegant than the purse. It doesn’t grab you by the nose. It invites you to contemplate, at your leisure, this perverse microcosm of the war profiteer’s mentality.

Perhaps the biggest miss on the symbolic level is the choice of a planet-killing asteroid as an allegory for climate change. An asteroid is an intergalactic bullet that can be dodged (or not) in a single climactic moment, not a million-pronged catastrophe drawn out over a decades-long climatic moment. Asteroids, symbolically, are an act of god, a smiting. If you believe that the greenhouse effect is Mother Nature’s way of taking revenge on us for bad stewardship, that half tracks, but I think it locates the source of the trouble too far out in the Oort cloud, and not in the first world’s back yard.

Furthermore, the best solution presented for dealing with this asteroid — deflecting the thing with nukes — is a highly technical piece of science fiction. But when it comes to climate change, McKay objects to the technologist’s optimism:

“I think it’s not crazy to say that maybe that’s part of the reason we’re not taking the collapse of the livable atmosphere seriously. Elon Musk was asked about climate change and basically said, ‘I know that technology will take care of it.’ That sounds like someone who’s seen a lot of movies where you know that in the third act it’s going to work out. … For people to see a movie that ends where people don’t work to get the happy ending — hopefully some people will have a reaction to that.”

(A sidebar on that quote: McKay argues that people like Musk are optimistic because they’ve been told one too many happy endings. He’s got the causation backwards. Stories end happily because people want & expect them to. That’s not a learned response, it’s an instinct to avoid bitter aftertastes. Of course downer endings can be earned by stories that work well. DiCaprio dies in Titanic, too, but the downer ending there didn’t stop it from becoming one of the biggest movies of all time.)

Again we have a critical mismatch between the storyteller’s goals and the story’s message. I want to unpack this, because the most interesting material in the movie circles around this theme. It seems to understand that it’s struggling to encode its message in a film, and may even resent the fact that it has to.

On the morning show with Cate Blanchett and Tyler Perry, a few references are made to the idea that “a spoonful of sugar makes the medicine go down”. The bumpkin scientists, lacking media training, reject this as immature, but the movie itself certainly seems to believe it — perhaps begrudgingly.

The Grande song features these lyrics:

It’s played for laughs in the movie — kinda — but there’s contempt, too. Why did I have to make a star-studded movie for you morons to take this seriously? Why isn’t peer-reviewed science enough for you?

Take this ambivalent attitude towards the audience, throw it in with the insufficiently empathetic cynicism and mismatched symbols, and it’s no surprise that people seem to be shrugging the movie off.

Still, I find it an instructive effort, because McKay/Sirota were trying to solve a problem that many artists face. We want to communicate something that other people don’t want to hear, for whatever reason. Maybe our truths are too strange, too nasty, too depressing. Rather than hector people for not wanting to hear what you have to say, you transmute your message, bury it in something they’re excited about. That process is destructive, and it’s hard to keep your meaning intact.