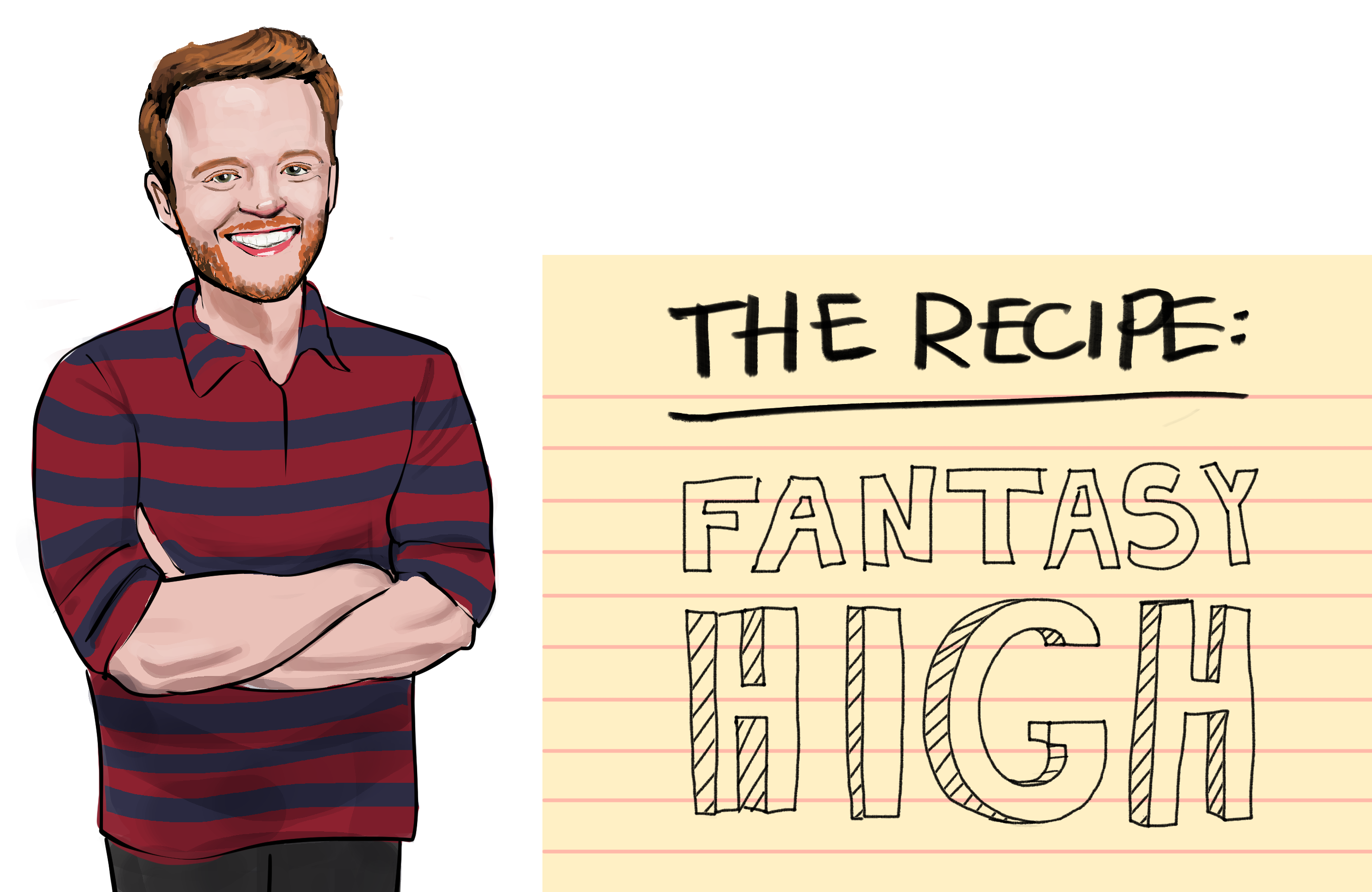 Speaking just for myself, there’s not much difference between food and stories: I need ‘em both to live, my reason for consuming either is frequently emotional, and occasionally, I’ll engage in some truly reckless bingeing. My latest binge was the second season of Dimension 20’s Fantasy High, a D&D “actual play” show which I devoured over the course of a week. I refuse to do the math, but I must have been watching over four hours a night.

Just like with food, it’s much easier to binge certain kinds of stories than others. (Nobody’s burning through The Handmaid’s Tale.) Battlestar Galactica, with its relentless plotting, cliffhangers, and long-running mysteries, was so bingeable it got a Portlandia sketch.

If Battlestar were food, it’d be candy, reliably dispensing that sugary dopamine rush of “WHAT’S GONNA HAPPEN NEXT?” in a way that’s just ephemeral enough to make the next bite/episode a necessity.

Fantasy High, as a comedy, is more of a comfort food — chicken noodle soup, let’s say. It’s warm, wholesome, palatable even on an upset stomach. I enjoyed it so much that I want to break down the recipe for you.

In a Familiar Setting, put:

(I solemnly swear that I will tone down the food metaphors going forward.)

The American high school experience is a common denominator for something like 85% of the US population, and probably much higher for D20’s audience. Though funnily enough, I’m pretty sure three of the seven players at the table — Brennan, Lou, and Siobhan — didn’t attend the typical American high school. Brennan was on a home school plan, Lou attended a Catholic boys’ prep school, and I assume Siobhan was conquering the British secondary school curriculum.

But that doesn’t matter — thanks to movies like The Breakfast Club, that prototypical American high school has seeped into the groundwater of Western culture, so we all kinda know how it works. More importantly, we’re comfortable with it. Comfort is a huge part of FH’s appeal, so it’s well worth it to sacrifice the internal consistency of the secondary world for the sake of the audience’s emotional immersion.

Quick tangent: this familiarity is equally important for the show’s marketing appeal. An actual play D&D show appeals to such a tiny slice of the general public that Dimension 20 can’t afford to bleed any more potential viewers with an elevator pitch that lacks broad appeal. So after a high school story, the show:

As a writer trying to establish himself, it’s really interesting to see how other artists solve that bootstrapping problem. When you know you’ve got the goods, the hard part is getting someone to give you a shot. Dimension 20’s strategy is to draft off other popular IPs (The Breakfast Club, Game of Thrones, Harry Potter), and try to get as many warm introductions to established audiences as possible (reaching Critical Role’s fanbase via Matt Mercer, reaching the MBMBAM fanbase through the McElroys).

And there’s really no better pitch than “this product is like that other thing you already love”, particularly now, when we have a paralyzing glut of entertainment options. (I am convinced that part of the nostalgia for Blockbuster was the fact that your choices were constrained by the available shelving in a 900 sq. ft. storefront.)

Enough marketing — let’s get back to storytelling. As I said, comfort is crucial to what Fantasy High’s doing. I hinted at it before with the chicken soup analogy, but Fantasy High is a therapeutic narrative. And all therapists try to establish a “therapeutic alliance” with their client, which is founded on shared goals and a trusting, positive, and safe atmosphere. To that end, there are some very basic things you can do as a storyteller to put the audience at ease.

The first is structural: keep a strongly polarized cast of characters. The good guys are good, the bad guys are bad, and they’re kept distinct. When you do this, the reader can relax the part of their brain that manages complex feelings for ambiguous characters. They can simply refer to the color of the NPC’s hat. Is it white? Then I can let my guard down. Is it black? Okay, enemy nearby, let me enter my combat stance. This type of clarity is crucial for establishing emotional safe zones within the narrative, and these are where growth and healing can happen.

I want to be clear that a strongly polarized narrative is not necessarily static. Characters can travel between the poles — they just do it very quickly, and don’t linger in the space between. FH has a number of surprise villains, who unmask themselves and in a single moment become a baddie, like [SPOILERS REDACTED]. Moving in the opposite direction, you’ve got a guy like Ragh Barkrock, who transitions from bully to bro in a single scene, or [SPOILERS REDACTED].

Characters that have the potential to inspire ambivalence — Kristen’s religious fundamentalist parents, Adaine’s cruel and snobby parents — are largely kept off-screen, on the principle of “if you don’t have something nice to say, don’t say anything at all.” I’d have loved to see Kristen at the dinner table with her family, wrestling with her crisis of faith; or learn more about what created the Cinderella-esque homelife that Adaine suffers within. But pursuing those threads would take the characters and the audience into that ambivalent middle ground, which is a non-starter.

Maintaining such a demilitarized zone between good and bad — hell, even honoring such a dichotomy in the first place — may feel inauthentic or overly simplistic, particularly if you were trained in the mainstream literary tradition. Stories are so good at generating empathy that it can feel like a dereliction of duty when you as a writer choose not to do it. But narrative focus is zero-sum, and in the case of the bad parents, spotlighting them would actively detract from the emotional growth of the protagonists, who need a consistent obstacle to overcome.

The comedy is my favorite part of Fantasy High, but its narrative function is pretty obvious, so I’ll just make two quick points.

Mulligan puts his mission statement right there in the name of the setting: these kids live in a country called Solace. So it’s no surprise that this is a story about strong friendships, big hugs, and being picked up when you’re feeling down. This emphasis places it in a proud tradition of what I’ll call You OK? comedies, alongside shows like Friends, Ted Lasso, or New Girl.

There are countless scenes like this in Fantasy High, thanks in part to a truly elite parent:child ratio, somewhere north of 2:1. Whenever a PC is feeling glum, there’s a platoon of NPCs that Mulligan can send in to gently knock upon the door, sit at the foot of the bed, and ask that key question: “Hey… you okay?” With two notable, aforementioned exceptions (Kristen and Adaine’s parents), all the parents are lovely and deeply concerned for their kids. And the good vibes aren’t just restricted to characters with a direct genetic stake in the PCs — there’s a super-chill sentient van, a kindly maid named Cathilda, and the werewolf Jawbone, a bouncer-cum-guidance counselor so saintly and compassionate that he puts Jesus Christ — sorry, Helio — to shame. In one celebrated scene, Jawbone talks a character through a panic attack.

Now if you haven’t watched Fantasy High yourself & are watching that scene without context, it may seem treacly. But take a look at the top YouTube comment for that scene:

The simple fact is that almost nobody gets enough love & support. If your story can make up some fraction of that shortfall, even if it just means helping a reader get through a miserable week, that’s a job well done. And to accomplish that, you may have to disregard a lot of received wisdom.

Let’s remind ourselves just how narrow most storytelling advice is. Fiction is everything that’s never happened. A big topic. So when we try to come up with something to say about it, we fall back on the availability heuristic. What’s the first thing that comes to mind, the most fictive of all fictions? We usually land on Greek tragedy, because this was how poetics was introduced to us in high school. This reflexive focus on classical drama is how we fool ourselves into believing that in every scene a character has got to want something, and that they have to be prevented from attaining it, and that the plot has to always be churning forward, and that you can’t take a chunk of time to watch characters brushing tears from each other’s cheeks.

Stop thinking like that. We are not talking about how to make a play, or a novel. Don’t even think about how to tell a story. Think about giving a person an emotional experience. Whenever you catch yourself wondering if a scene helps the story, the only litmus test is: is this something that people would be interested in feeling? The answer is often yes.

A DOLLOP OF TRAUMA

At the same time, a therapeutic narrative needs to concern itself with more than good vibes and prosocial interactions. If it doesn’t, then it’s just a narcotic, good for numbing and not for healing. Fantasy High, beneath all the jokes and bonhomie, does confront some heavy shit: abandonment, inadequacy, sexuality, and every kind of daddy issue. In one of the second season’s best episodes, Mulligan straight up asks the players to verbalize their characters’ deepest fears.

And in one of the scenes stemming from those answers, Mulligan perfectly articulates a very intense fear of mine. Not only is it always invaluable to have a writer put their finger on something you’ve been unable to express, but because FH does all this work to create a zone of comfort, I was receptive to hearing it, and was able to reflect on it. That’s what the therapeutic narrative is all about: creating a safe, stable platform from which the reader can dive into real shit.

I’d like to wrap up with a little hard-won advice. Every book I’ve written has been therapeutic, whether I knew it at the time or not. But my books were more therapeutic to write than they are to read. The recipe I laid out here makes some very conscious deviations from reality, particularly in the handling of protagonists and antagonists + the sheer quantity of carers. These were deviations that I couldn’t afford to make, for the sake of my own healing process. That is an absolutely valid thing to prioritize in your art — just remember that readers “use” fiction in very intentional ways, and if you spurn the possibilities of fiction for being exactly that, fictional, you may be rubbing the reader’s nose in some painful stuff without providing relief. And that may be truthful, but is it kind? A spoonful of sugar helps the medicine go down, or, more to the point: when a parent kisses their kid’s scraped knee, there is no medicine except for the gesture of care itself.